When Elenie and Ieaun got home after graduating, Elenie called Evie to let them know they were back and could have the animals back whenever was convenient.  Evie said she would bring them round immediately, but some unexpected things had happened while they had been away...

When Evie arrived, she brought three kittens as well as Jewel; "I don't know quite how this happened, since both your Jewel and our Oceana are female, but somehow the two of them have managed to have kittens!  Seren is desperate for us to keep them, but I told her you should have at least one.  Oh, and it seems that your Taliesen has managed to get our mare with foal as well, Talfryn reckons she's going to have two and he'll bring one of them over for you once she's foaled." 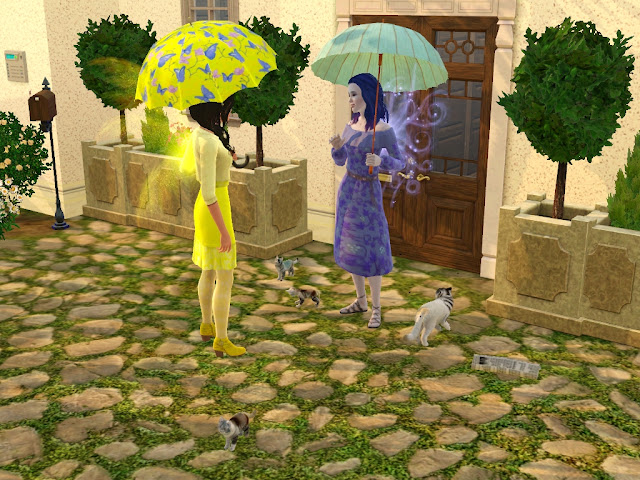 Elenie was rather startled, but after careful consideration and examination of the kittens, she and Ieaun decided to keep the female whom they called Nerys.

A few days later, Talfryn brought a young filly round as promised. 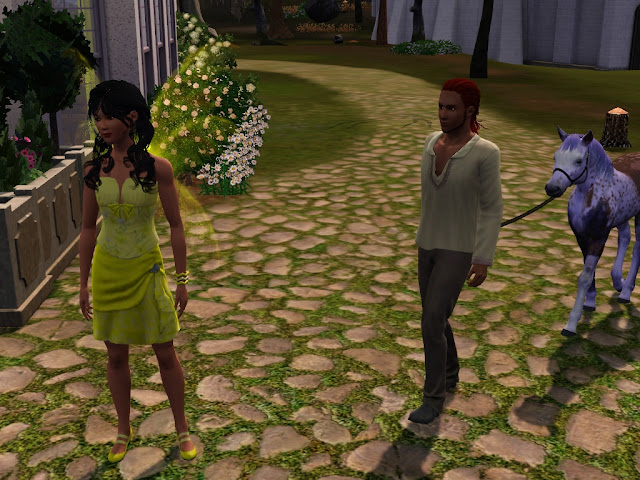 After introducing her to Elenie, he explained that he and Evie believed the filly would grow up to be a unicorn and advised Elenie that she and Ieaun should wait until then as two unicorns would be a great help and protection in their search.  He also gave her a drake egg for Ieaun, saying mysteriously "I believe it's a variety rather suitable to his ancestry..." 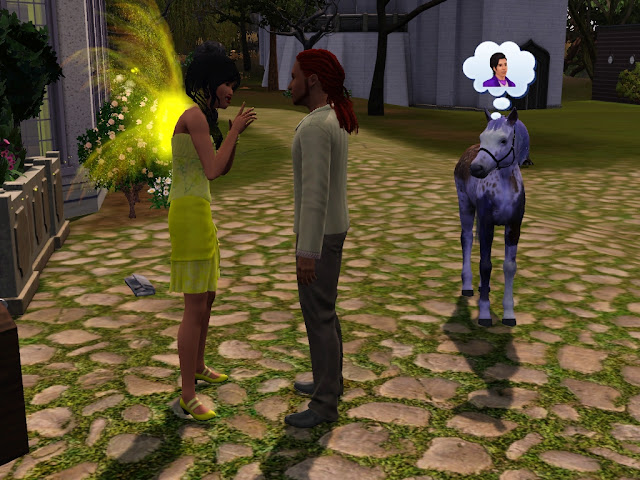 Elenie discussed this with Ieaun and they both agreed that this seemed a sensible suggestion; Ieaun also pointed out that they needed to do a certain amount of preparation, both in terms of preparing the spell which he was learning to guide them and also in preparing what to take with them.

Having decided this, the two of them began their preparations.  Elenie spent hours mixing various elixirs which might be of use to them and also searching various important ingredients (and cloning them repeatedly). 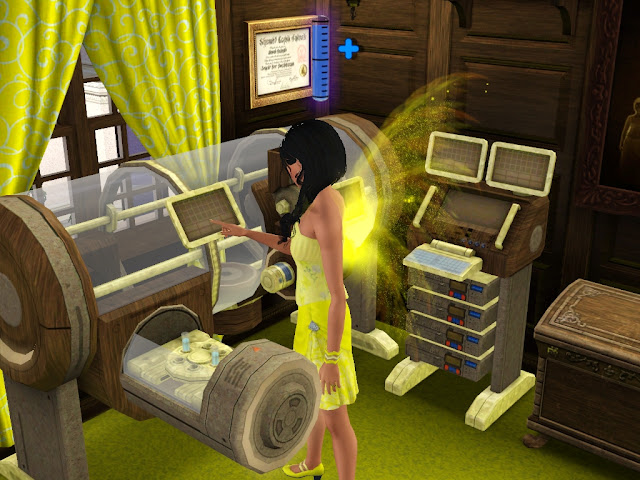 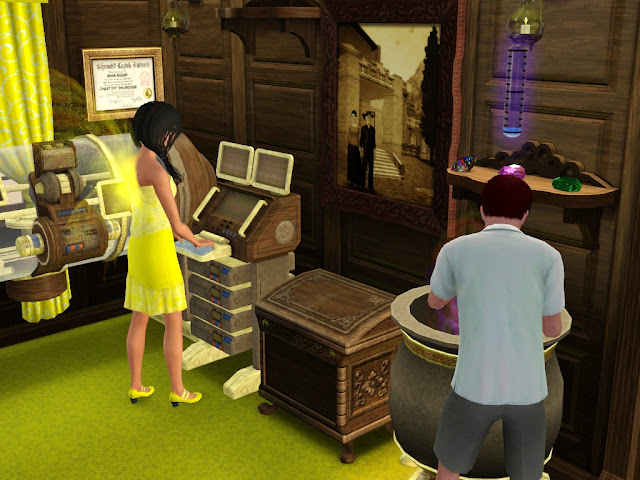 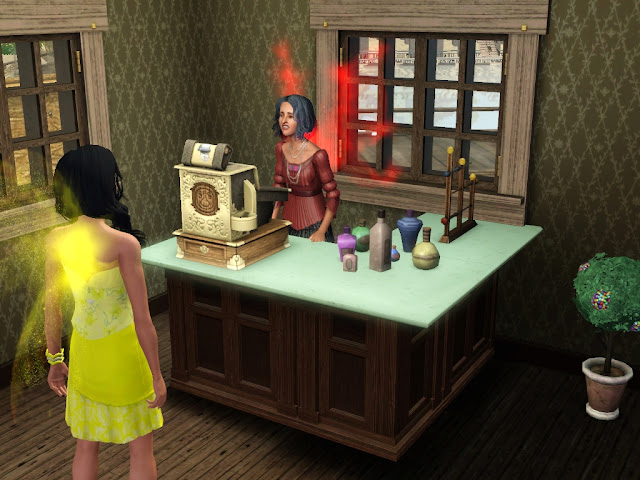 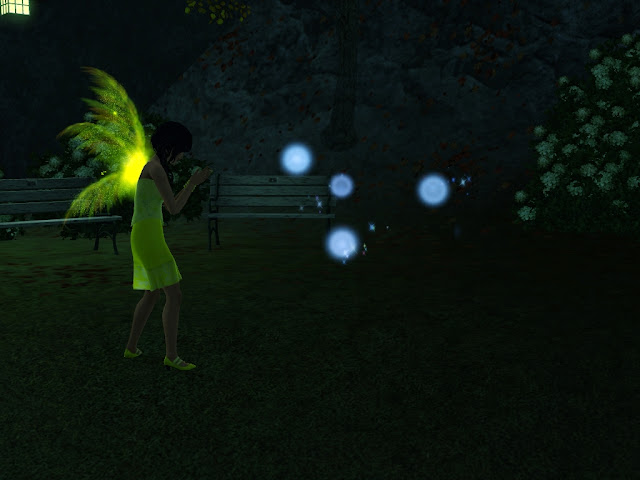 She also spent a fair amount of time learning new recipes and learning as much as she could about the borderlands they would likely be travelling through. 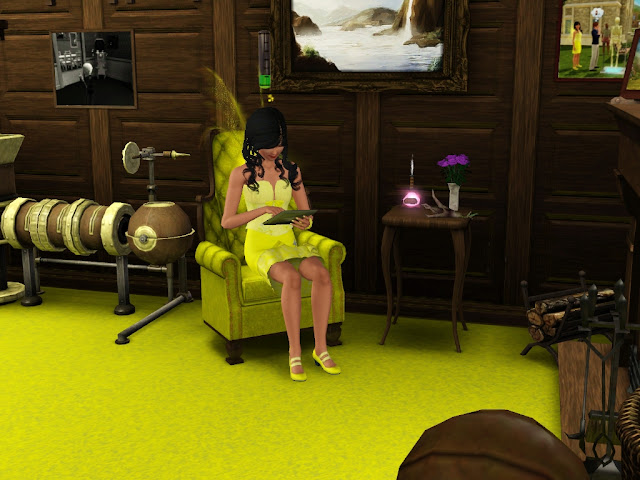 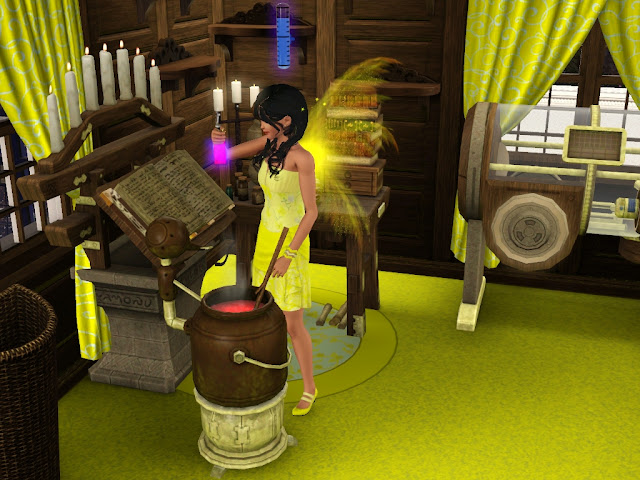 Ieaun on the other hand spent a lot of time honing his Sight and searching through the past and future to try and find out anything he could about where they needed to go. 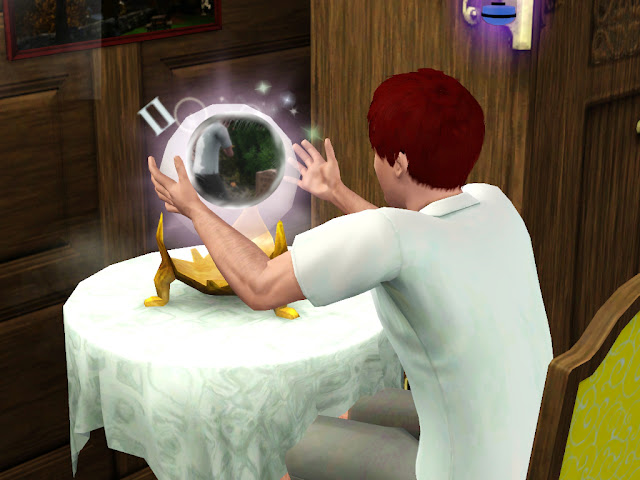 He found a number of the visions he had in the process disturbing however, and after careful consideration arranged to meet his mother, Rhiannon, outside the fortune-teller's caravan to discuss these visions and see if she could give him any guidance. 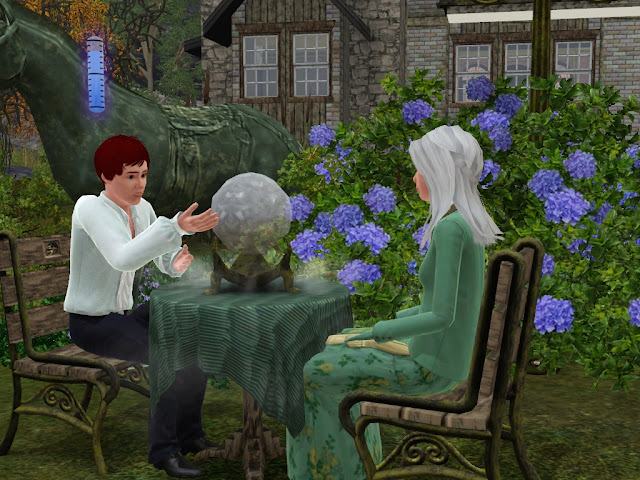 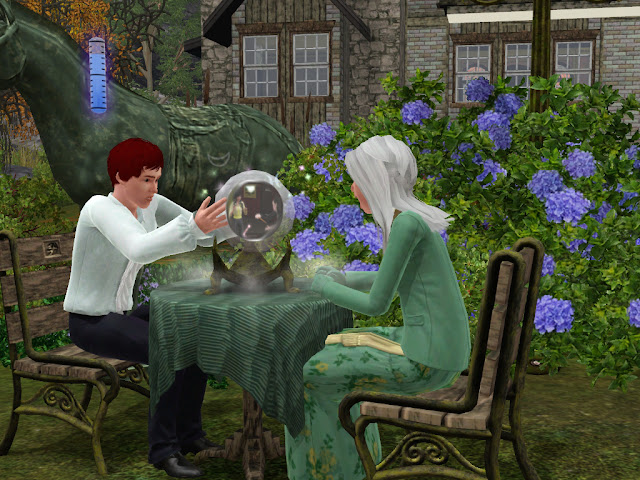 Ieaun was able to summon several of his more common visions to the crystal ball and share them with his mother that way. 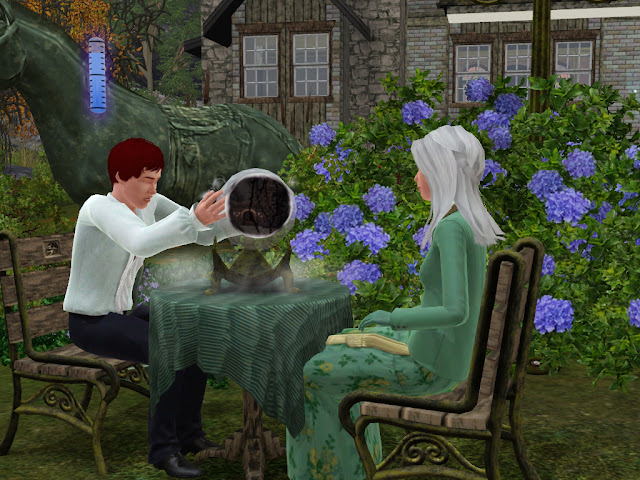 When he had finished, she sat back for a while and considered the position.

"Well my son, I understand your fears.  The problem is that you are only seeing fragments and you shouldn't be - you've more than enough talent to see the full scene unfolding in your visions, but instead you're only getting individual snapshots.  Until you can see what happens before and after each snapshot there is no way of telling how they are related or what will actually result from them; still less how to change what you are seeing - to do that you must see the cause of each snapshot else your attempts to change things may well only bring about what you fear.

Come to the wagon and train with me every day until it is time for you to leave, we'll work on focussing your sight and holding the visions for long enough for you to see what happens before and after." 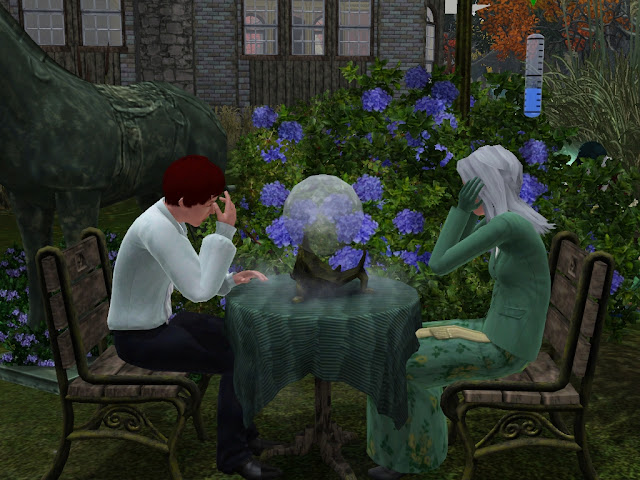 For some time, life proceeded in this fashion, with both Elenie and Ieaun taking care of both Ceridwen the filly and Nerys the kitten. 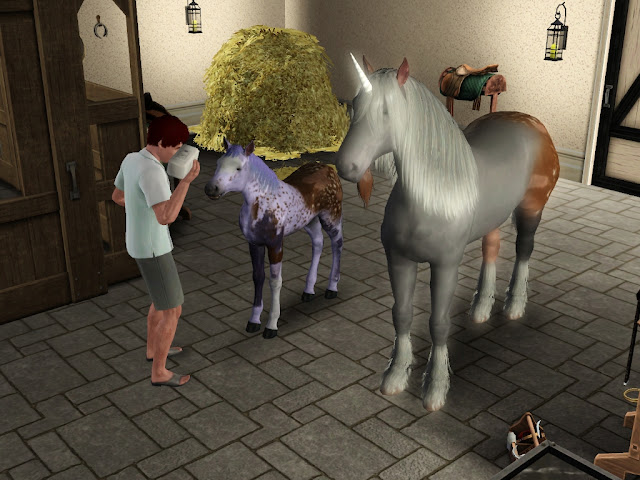 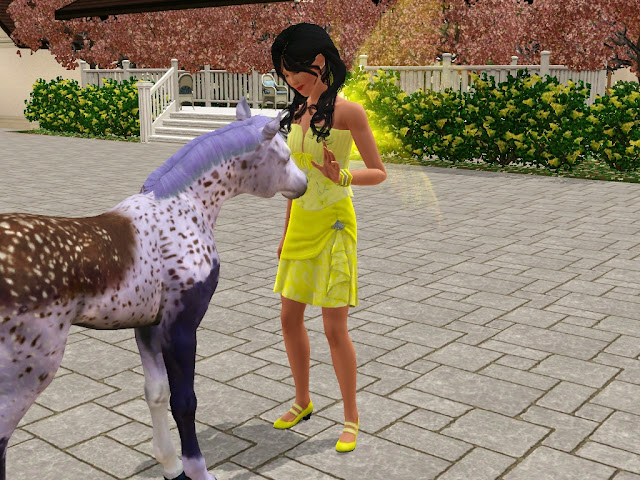 They did take a break from their preparations to pay a visit to the summer festival. 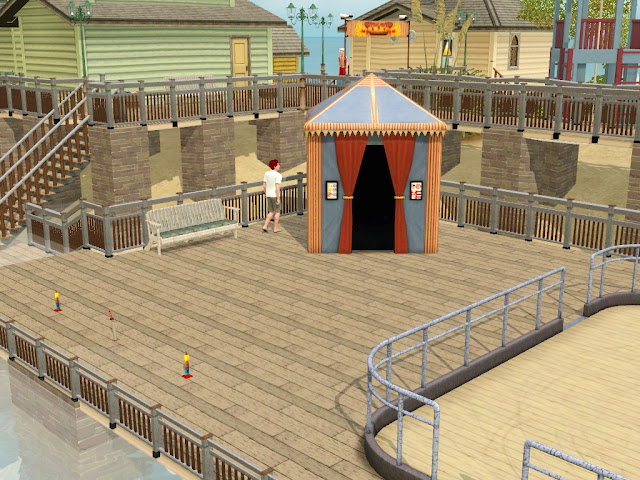 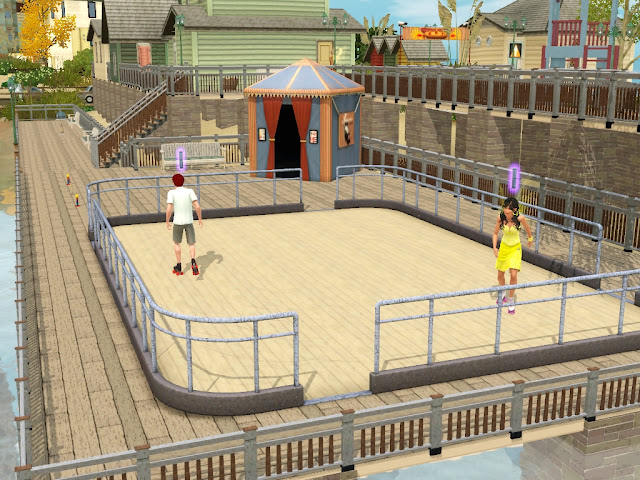 Skating was enormous fun, as was the hot-dog eating competition (which they lost) and the water balloon fight. 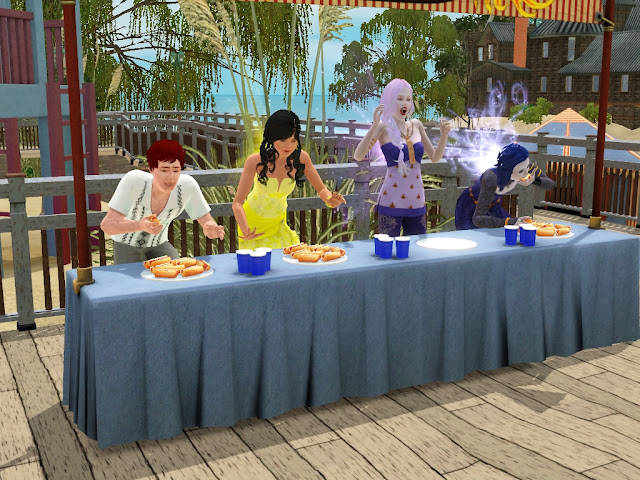 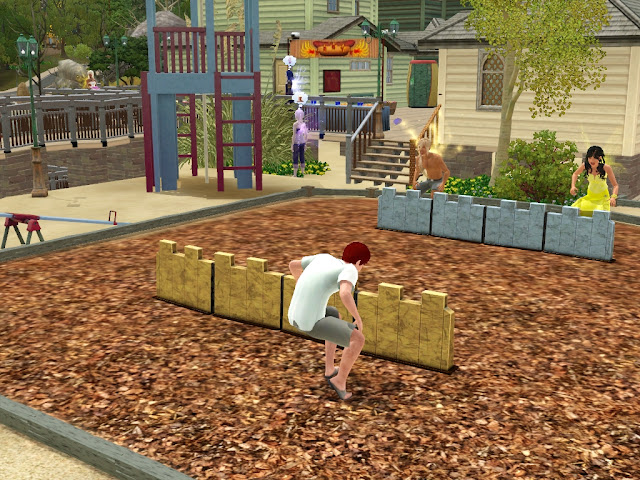 One day, after a gruelling session with his mother training his sight and trying to see more details than the brief flashes he had seen so far, Ieaun felt the drake egg he had been carrying around begin to shift.  Making his excuses to his mother and hurrying outside he carefully placed the egg down on the ground and waited. 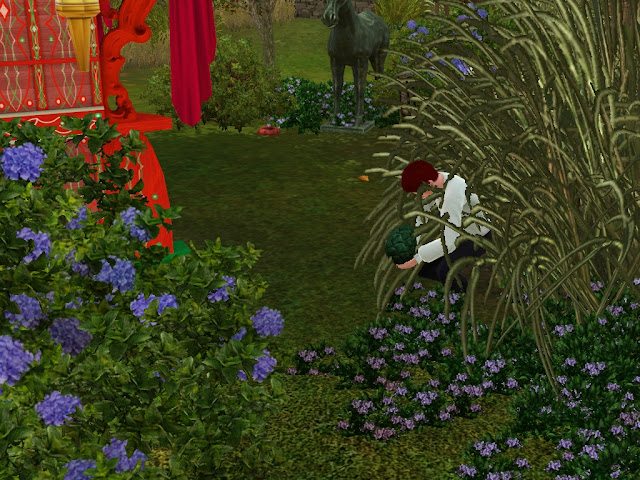 Soon enough, the egg began to shake violently and after a while, with Ieaun whispering encouragement, a small red drake emerged and focused upon him. 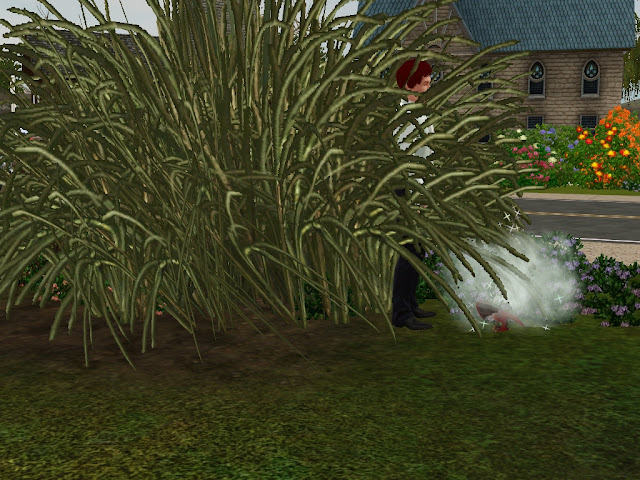 Not long after that, Ceridwen aged up into a fully grown unicorn and they knew it was time to begin the search.  Ieaun's study of the spell had told him that they needed a repository for magic as part of the process and so they met up at the nearest weather stone together.  Elenie had discussed the spell with Coryn who had agreed to help and Evie and Talfryn had offered to come along in case things went wrong and help was needed.

The first stage of the spell was to collect the essence of people related to Dory (as the person they were seeking) into the stone, for the remainder of the spell to work upon.  Elenie went first, pouring her power into the stone herself. 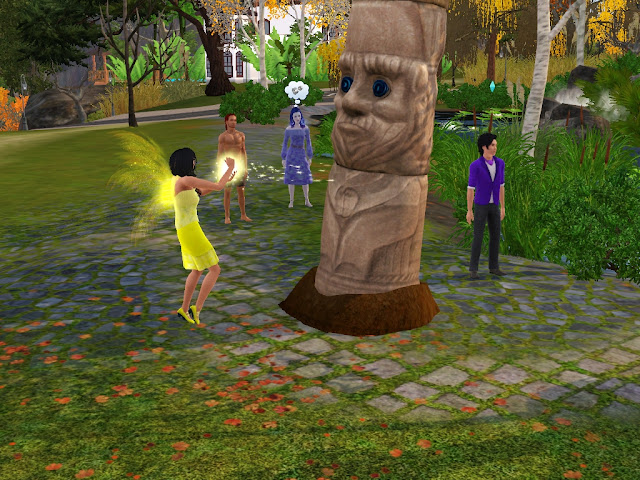 Coryn on the other hand was a normal sim, with no power of his own to place within the stone.  Ieaun therefore first cast a spell upon him to draw out some of his essence, before then using his own power to place that within the stone. 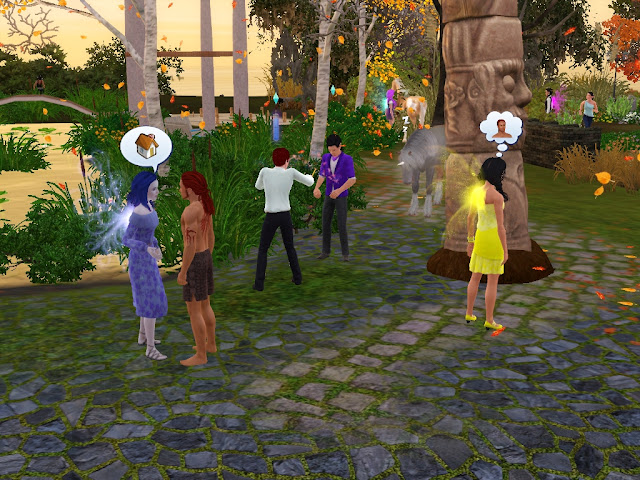 Once this was done, Ieaun then had the difficult task of casting the next stage of the spell upon the stone; mixing the essences from Elenie and Coryn and formulating a seeking spell to search for what they had in common, whilst also ensuring that the spell would not focus on either of them as being what it was looking for. 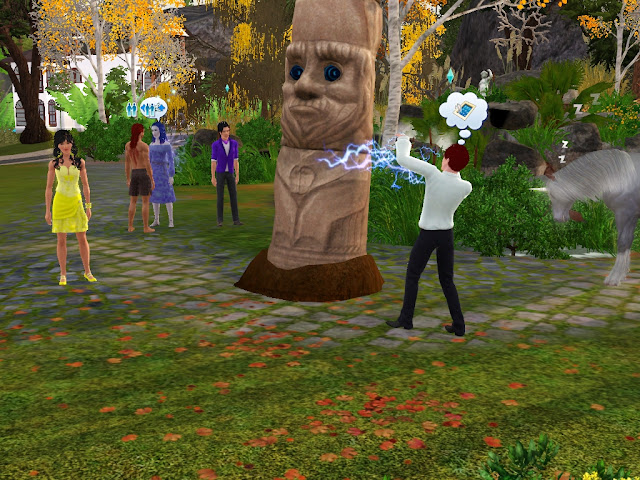 Finally, once this was complete, Ieuan had to transfer the spell from the stone to Elenie, so that she would be able to sense the spell's directions as they searched for her mother. 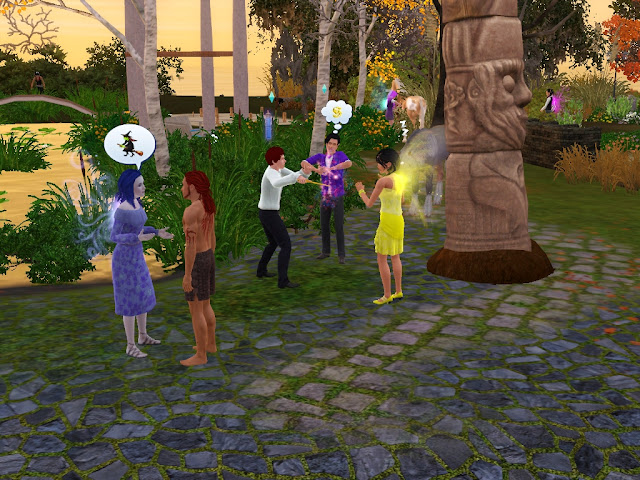 With the spell complete, the two of them made their farewells to their friends and family.  As Elenie bid farewell to Evie and Talfryn, Evie gave her a pendant set with a large yellow stone.

"Just as a precaution, I've placed a spell in this stone; it is linked to a stone in my possession and if you are ever in mortal peril the two stones will turn red.  If we can, we will come to find you and aid you should that happen." 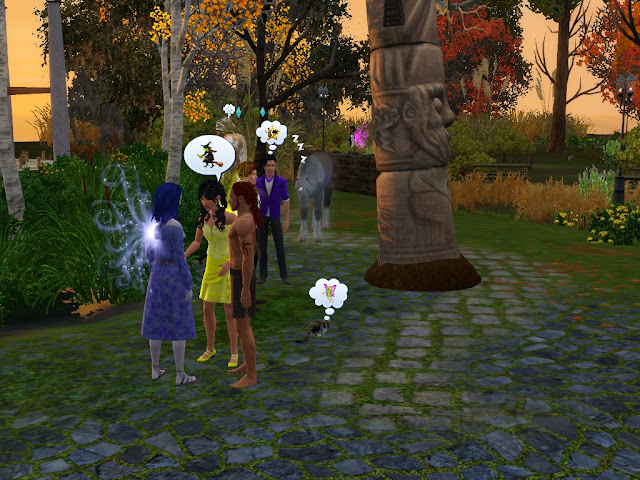 Elenie and Ieaun then headed home to pack the gear they had prepared and change into more suitable clothing for travelling unicorn-back. 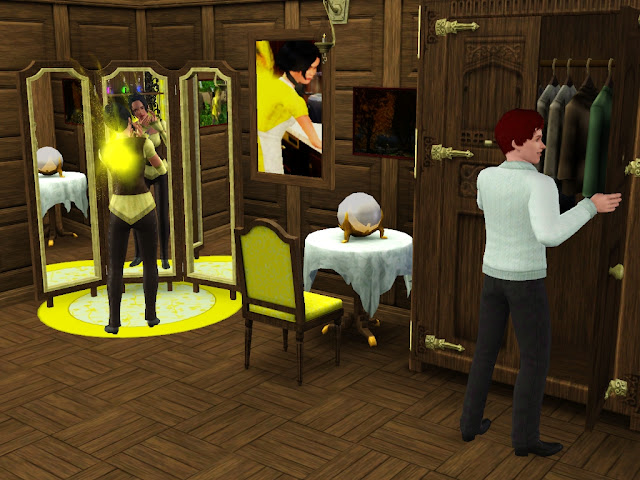 Once they were ready, they headed outside and mounted Taliesen and Ceridwen.  Elenie carefully formed a mental link with Taliesen who chose their first destination from the direction the seeking spell pointed in and the two unicorns transported themselves and their riders... 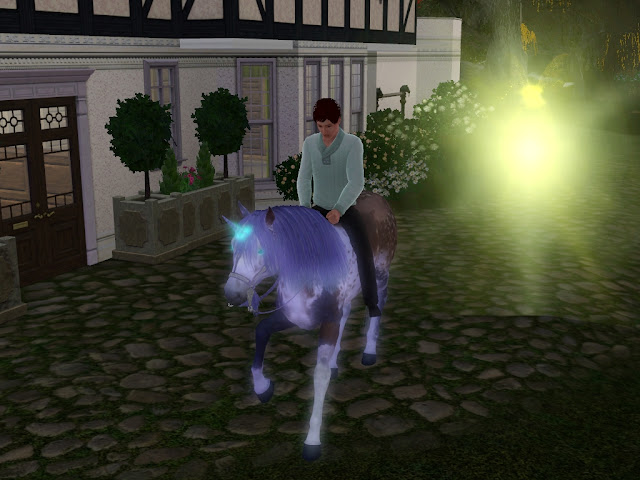 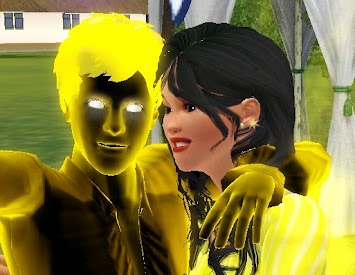